I left Reno following a route suggested to me by John, around the western edge of Lake Tahoe. The northern part of the route was under construction, which was annoying, and there were a lot of expensive looking houses and golf courses.

Of course, it was still pretty. I worked my way south along the edge of the lake, stopping in parks to look around.

As I went south the houses thinned out and the terrain got rougher, but I found I enjoyed it more.

As it turns out the southern area is a state park, which is why no one had built houses on it. 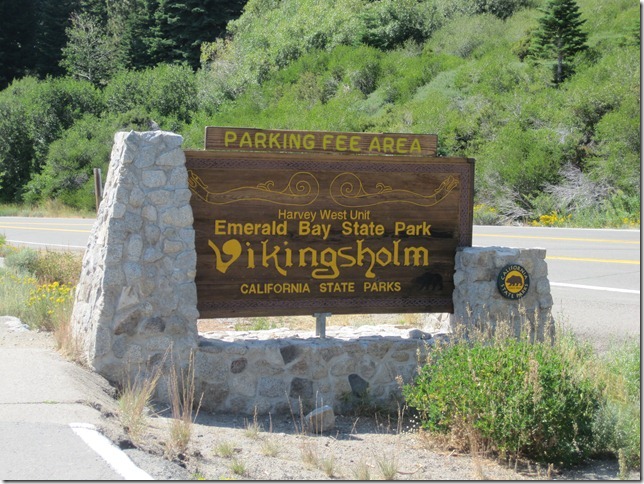 I missed the part of the sign saying there was a fee. Maybe motorcycles are free? I didn’t  even get a parking spot, just a small area out of the way.

I continued south towards Yosemite. I was hoping to get into the park before camping, but as the sun sank I was wondering if I was trying to get too far. 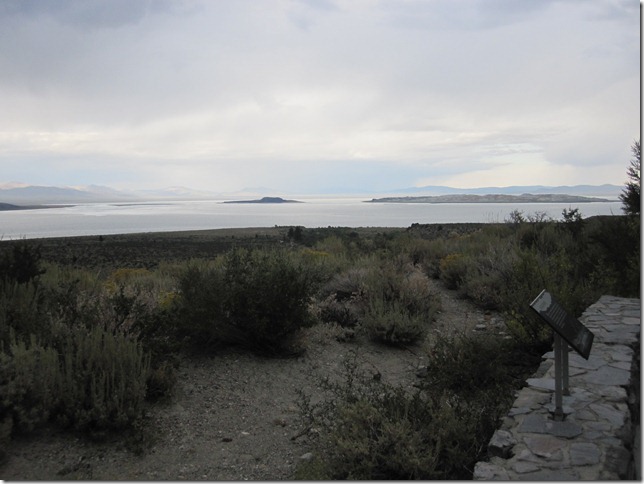 At the bottom of Tioga Pass is a visitor center for Yosemite, but it had just closed when I got there. John had recommended a deli in a gas station, which was odd but it was more like a real restaurant, with ribs and seared tuna. The hostess said she was reasonably sure the camp grounds at the top of the pass, just inside the park, would have space. So I started up the pass. 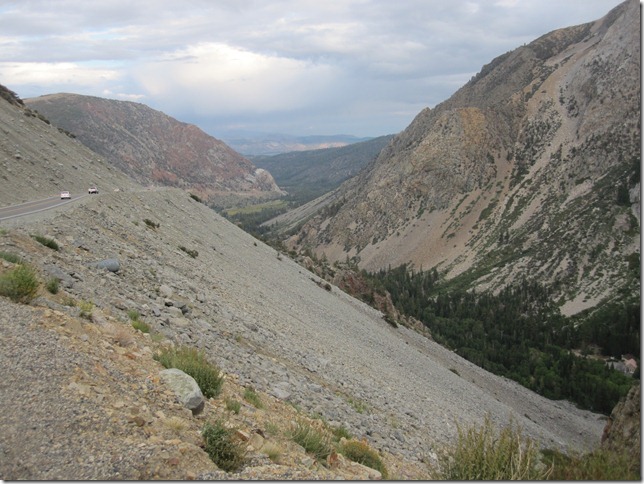 Tioga Pass was steep, and I spent a lot of time in 3rd gear. There were a lot of pull outs, but the cars were not doing much better.

When I got to the top of the pass, where the entrance to the park was (having gone from 7500 feet to 10000), I was greeted by a sign “Campgrounds Full.” I asked the ranger at the gate if they really were, and was told yes, there really were. So I turned around and headed back down the pass. Since I didn’t get to camp in the park I decided I would ride all the way back down the pass. It would be warmer there. I didn’t get far before seeing people on the side of the road trying to flag down cars. No one was stopping.

They had a (very) flat tire on their trailer, and the luge wrench they had with wouldn’t fit. I had a socket that was the right size so I fished it out and let them use it.

Sockets aren’t the best for getting lug nuts off, and we still had some trouble. We also managed to flag down another car with a proper tire iron, so I packed up my tools and continued down the pass. The sun had set, both behind the mountains and officially, and it was starting to rain. I found what I thought was the last camp ground and quickly found a spot. It still got chilly, and in the morning I would get to go up the pass again.