Columbia Part One, on the road to Cali

While in Bogota I had stayed in the ‘nice’ part. The new business district designed for the United States visitor in mind. Everything was clean, almost everyone spoke English, and there was even a McDonalds.

But, really, that wasn’t the Columbia I wanted to see. It felt fake.

I rode south west from Bogota, heading generally back for the Pan American. There is a spur that leads from Medellin to Bogota, but I didn’t try to find it, and despite reading on ADVRider(.com) the road to Ibague was awful I went that way.

The road started out as a four lane highway, which let me make some miles, but soon turned into the small, twisty two lane road through the mountains I was looking for.

I had planned to stop in Ibague, but it was still early when I got there, so I kept riding, thinking I might make it all the way to Armenia (in Columbia, not Europe). As the day wore on, and I realized I didn’t want to still be riding at 6pm. I rolled into a little town with a lot of restaurants and a hotel with a big lobby (for motorcycle parking).

I was still in the Coffee Triangle (I think), those are roasted beans shooting into a bucket.

And there was a cool church, of course.

And a somewhat fortified bridge

Being the only hotel in town, it got rather busy. I think the room next to mine was either rented out twice, or the guy brought two different women over one at a time. (based on noises). Then someone wanted to get a room around 3am. I guess the desk was unmanned, since they walked around yelling. On the whole, it wasn’t then best night sleep I’ve had on this trip.

And, of course, there was no hot water.

I was up and moving earlier in the morning than I would have liked, but despite the long night didn’t feel that tired. And I still had fun mountain roads to ride. 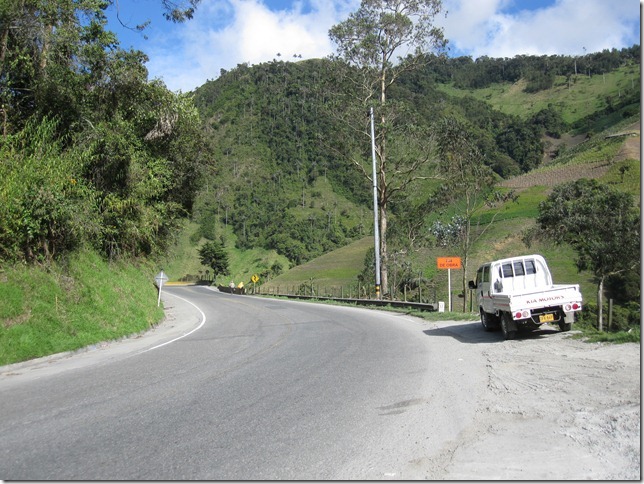 As I peaked a small mountain (9,000ft-ish, according to the GPS) the valley in front of me was filled with cloud. So I stopped for a picture 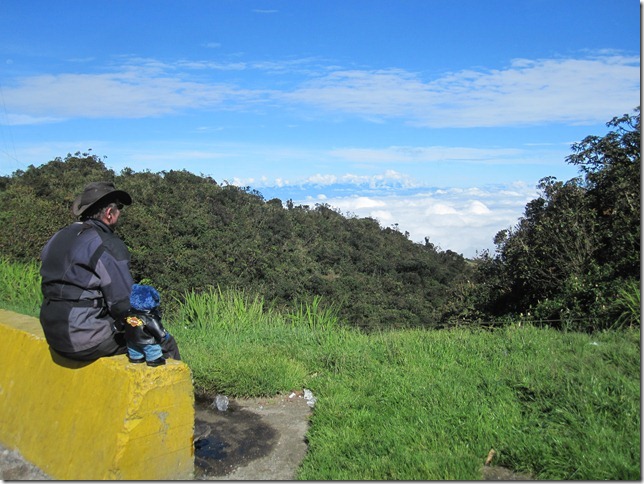 My jacket is really getting faded. You can totally see where the backpack goes.

Blue, of course, is much better at international relations than I am, and quickly made friends.

Back on the road, down the mountain and heading for Cali. I know I went through that cloud layer, but couldn’t tell. 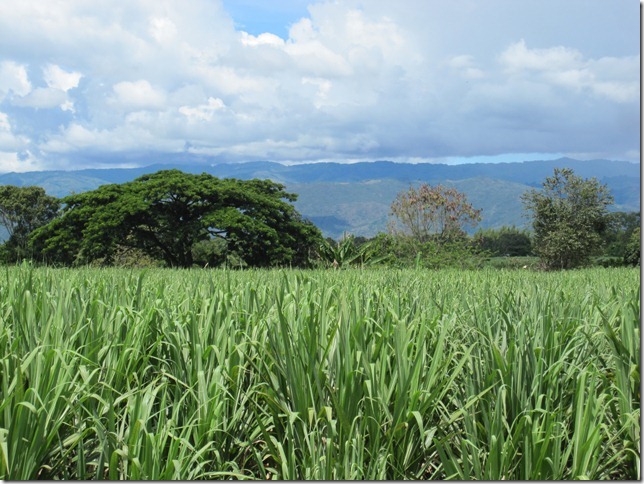 Just outside of Cali I stopped for a late lunch. I try to stop places that have a lot of business, since I think (hope) that means they are decent. This was actually an Italian place. After eating I got the check with the little piece of candy. I am not a fan of mint, and usually ignore these, but this one caught my attention

After dinner coffee candy. I guess that is what you get in Columbia, huh?

1 Response to Columbia Part One, on the road to Cali