I optimistically repacked the bike in the morning, figuring if it started I could go right away, and if it didn’t I had all day to unpack it again.

It did fire right up, and sounded terrible. But it ran and I headed back out onto the road working my way south.

I figured Santiago, which was my new destination, was about 500 miles away. I was hoping to cover that distance in two days, but it was going to be very much up to the bike. I learned it wouldn’t go much faster than 45, but I tried to keep it under 40, and closer to 35. And I took frequent stops to let the engine cool (desert and all)

I had only been on the road for a couple hours, when I pulled in the clutch for something and it felt a little funny. I pulled it in again and

Fortunately I have had a spare cable (for all the cables, actually) threaded through Curiosity’s frame since leaving on the trip, so the swap was quick and easy, but I was still wondering what the vintage bike gods had against me the last couple of days.

Back on the road, and still heading south, and still stopping often for engine cooling.

Curiosity was still leaking oil, though it was a little hard to tell from where and if it was new oil or dripping from the previous problem. After it went on for a while I decided it was probably new, but still couldn’t work out the where part. I decided not to top off unless the engine was completely cold, since overfilling (even a little) would probably be very bad.

I stopped in La Serena, mainly because I saw a grocery store and the days stop and go riding and depleted my food supply, and decided I had gone far enough for the day. I was then discouraged by how expensive all the hotels were. I didn’t want to rough camp in case Curiosity wouldn’t start again in the morning, so I wandered around some until I found somewhere that was underbudget (I had spent a lot while doing the rebuild) and had secure looking parking. 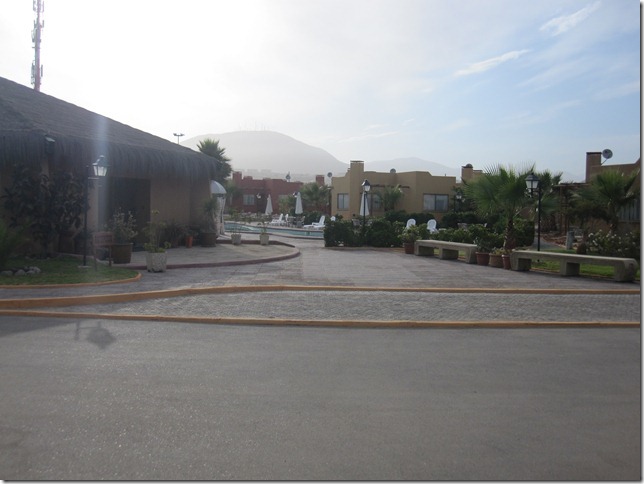 I wasn’t allowed to have the bike near my little cabin, and talked down the rate because there was an all-night party scheduled. They might have been loud, I slept right through it.

The next morning I was back headed south.

The beaches looked really nice and I wondered about my choice not to find one to sleep on. I again kept my speed down, and took breaks, but today the road did something different – turned inland and went over a pass.

It had been hot near the coast, but the real furnace kicked in when I left the shoreline behind. And the pass was only 2500 feet, I would barely have noticed it before, but Curiosity struggled up the incline in first or second gear, and I was stopping a lot more often to let the engine cool. 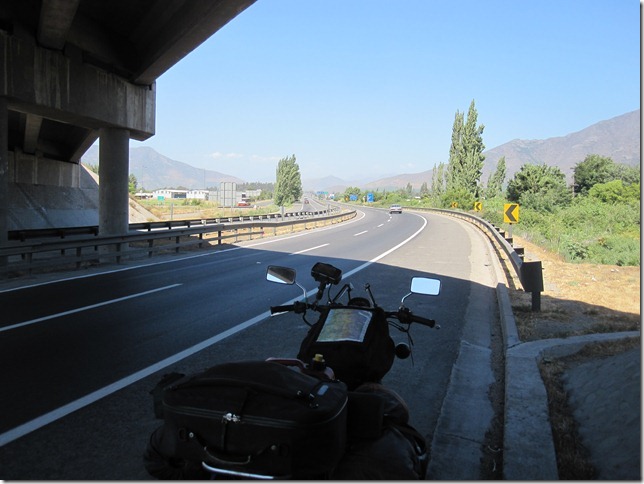 Pretty yellow flowers, but they had a bite

As the sun was sinking towards the mountains I reached the northern edges of Santiago (where the air port was, thank goodness). Curiosity hadn’t really recovered from the pass, and was now topping out at about 35, which I didn’t want to push it too. I followed the airport signs and looked for a hotel. In the end the only one I could figure out how to reach was the Hilton, which was definitely not under budget, but I knew it was the second cheapest hotel in the area so I took it. Curiosity left a nice oil puddle outside the front door, and I pushed it to the underground parking before taking a long shower and passing out on the bed.