I woke up early, but breakfast and packing, and people stopping to talk, slowed me down enough that it was 8am before I finally hit the road. I was determined to spend more of the day on Route 66, the Mother Road, and see what all the fuss was about. 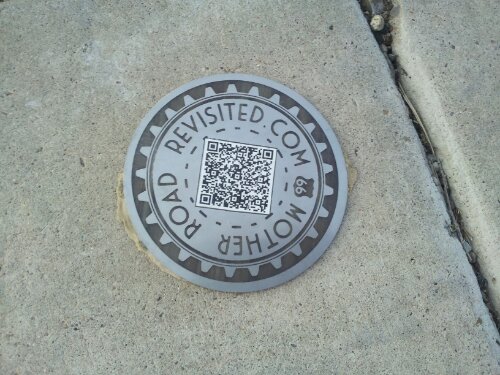 Most of the old road is gone, replaced by various stretches of the Eisenhauer Interstate System. I learned though, that each small town (and some big ones, and in some places for no reason I could see at all) had a Historical Route 66 marker. Some of the stuff was interesting.

But my general impression was of empty buildings, faded paint, and rusting cars. After a hundred miles or so I was actually getting a bit depressed over it all.

I’m not saying there isn’t anything to see or do along the route. I found this free car museum in a gas station in Texas (no town, just a roadside stop) 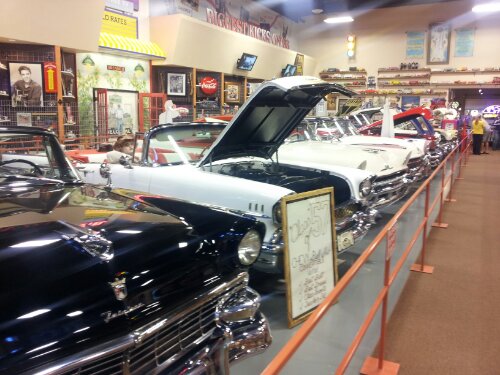 Along with cars and coke products, and this cool Yoda- 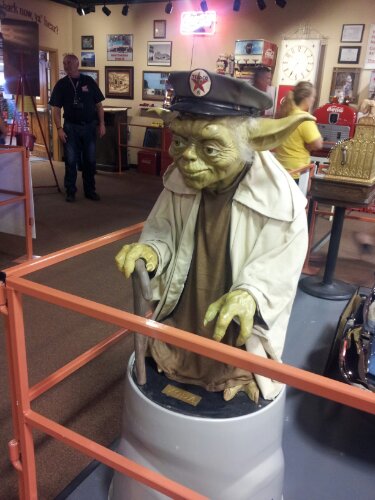 There were pictures of James Dean, Elvis, and Marilyn Monroe. While I checked out the museum I ran into the first of several large tour groups. They were from England, Spain, and Germany, and riding the road from Chicago to LA. The group was so large it had been split up, and passed the other parts later.

This part of the group was having a blast. They loved everything about Route 66, despite just missing the tornadoes and being caught by a couple heavy storms.

So many its just me, seeing the decay and feeling bad about it, or maybe that decay is what the road is now and I just had some other, unformed expectation which failed to be met. 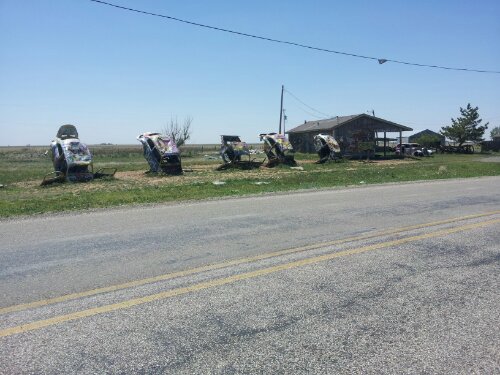 I will say you can’t ride Route 66 without feeling something, whether from the decaying buildings to the occasional bit of flash, to the never ending collection of t-shirts, shot glasses, and stickers for sale. I am planning on visiting the Oklahoma Route 66 museum tomorrow (which is apparently much better than the National version, 25 miles away) as my last tourist thing on the route. I need to get some miles done to make events back in WI this Sunday, which sucks but that’s how life is right now.