One of my favorite places to hang out online is Region 4 of Sport-touring.net. They are a fun, active community and meet regularly for coffee and rides. I don’t usually ride with them, since I prefer solo travel even before I started using Curiosity to go everywhere, but will meet up with them when I can.

For the last few years one of the members (Clay) has hosted a party at this house with cooked meat, alcohol, and for those who travel from any distance, camping in his yard. I haven’t ever been, but decided this year I would go.

Clay’s house is just south of Grand Rapids, almost directly across the lake. In fact, when I asked Google for directions, it promptly suggested I take the Lake Express ferry, which leaves from Milwaukee. It’s not cheap, though, and I didn’t want to spend the money. Going through Chicago was the next shortest route, but after thinking about it (for a solid 5 seconds) I decided to loop over the northern part of the lake, coming home through Chicago – basically to ride all the way around Lake Michigan. 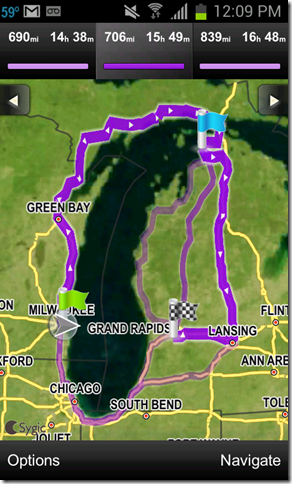 The miles from my house to Clay’s “Around the top,” as it were, were about 650. That is a long day on Curiosity, so I decided I would leave Thursday night after work, head north a ways, camp, then do a long ride on Friday to get within a hundred or so miles Saturday morning.

I’d already packed the luggage, so it was just a matter of installing the bags after work Thursday and taking off.

I was carrying a slightly different load than usual, packing my Nomad Tenere tent (now made by a company called Redverz). I’d gotten the tent on my Americas trip, but it was too big for what I needed and I haven’t used it much. Since I need to decide whether to keep or sell it, I thought I would bring it on this trip and see how I felt about it when I got back.

The weather forecast was only marginal, and while I was filming some video before leaving I remarked casually I was hitting the road well after I usually stopped for the day. That statement bothered me more than a little, and I almost just stayed home, leaving in the morning. But I didn’t, and got on the road north finding somewhere to camp an hour and a bit up the road. 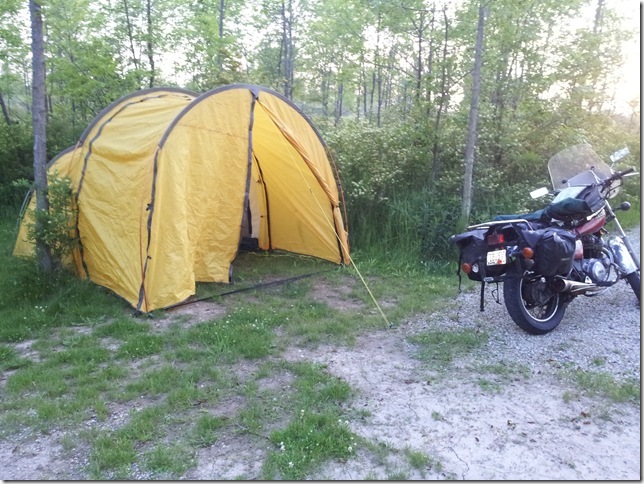 It really is a big tent.

In the morning I packed and and had a quick breakfast, then started north again. I had to log a lot of miles on Friday, which meant I had to keep moving – different from my usual stop and start approach to riding. I did, however, have some motivation. 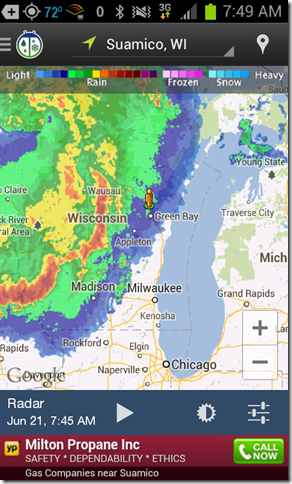 Large storms (40% chance, according to the forecast) were on the way, and I wanted to get on the other side of the lake. Lake Michigan tended to swallow up any summer storms coming from the west, something of a consolation for the way it dumped a couple extra feet of snow in the wintertime along it’s eastern shore.

So, I kept riding and riding. Around lunch time I saw I was almost clear, and despite the occasional drizzle I was feeling pretty good about it. 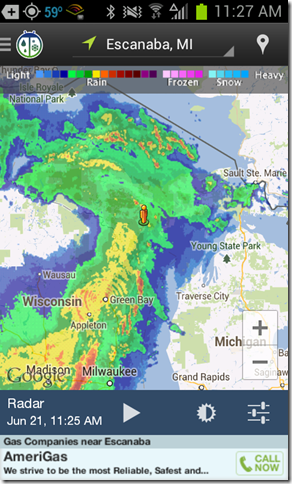 This looks worse than it really is, and an hour after lunch I was out of the rain and the roads were dry. It hadn’t warmed up much yet and the sun hadn’t burned through the clouds, but it was bright enough that I switched back to my sunglasses.

Riding US2 the rear of Curiosity started to feel a little loose, and then it started to get worse quickly. I got off the throttle and drifted over to the side of the road, the last few yards  with a rear wobble. Looking at my back tire I knew what I was going to see – flat.

On the center stand, so maybe hard to tell. but it was.

I was across the street from a closed-looking motel, so I pushed Curiosity over to and set up on the porch. I remembered all the times at OX13 I’d mentioned the number of riders I know who travel without the ability to deal with a flat on the road, without a motorcycle shop. Lucky for me, I wasn’t one of them. 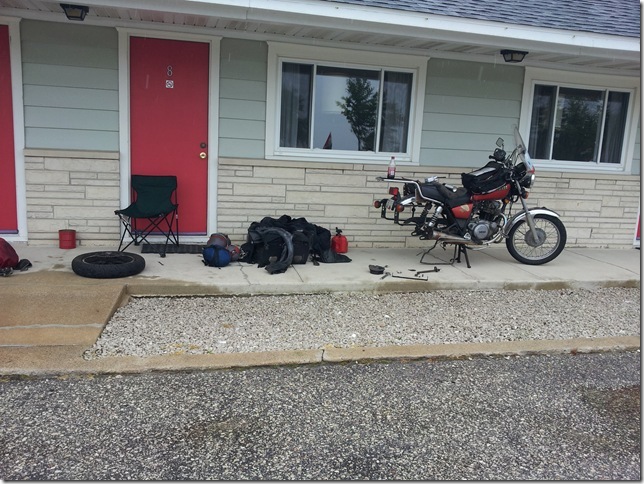 I’ll be honest and say I am not a fan of changing tires. I will gladly pay my local mechanic, or any other mechanic if they’re handy when I need them, to change them for me. That isn’t the same as saying I can’t change a tire, and an hour and a bit later I was back on the road.

The delay, however, meant I was back in the rain. I stopped at a gas station where three Harley’s, each two up, had stopped while riding west. They were headed for the worst parts of the rain this far north, and I had to shake my head as they carefully got directions to the closest tavern. I am guessing that was to wait out the rain, but didn’t clarify. By then I was only 20 miles from the Mackinac Bridge, which connects Michigan’s two parts. It’s a toll bridge, two lanes in each direction and the middle pair being a metal grate, so you can look down.

There was construction, meaning there was only one lane, and I was behind a semi truck doing 10mph. With the 20-30mph crosswinds it wasn’t the most fun I’ve had going over the bridge, but once I was on the south side it warmed up almost immediately.

2 Responses to Grilled Meat – Part One