So, it was time for OX West again. Last year I took an RV out, which seemed like a good idea but had mixed results. This time I was going to be on White Rabbit, by 2015 CSC RX3 (Owners are calling them Roxxies). I did a series of reviews on them over on The Minimal Motorcyclist, and have been impressed in general. This was going to be the longest trip yet.

With the Alaska trip coming up, White Rabbit got a luggage upgrade. I also dropped the top box, since I didn’t need the space.

Things didn’t start out well. I hadn’t been back long from Virginia and there was a list of things to do. This meant that I was doing the motorcycle service just before leaving. I like to have a few days around town, just to make sure everything is okay, but it didn’t happen. Still, it wasn’t the first time I was on the road right after working on the bike. Probably wouldn’t be the last either.

The plan was to leave Sunday morning, and be in Flagstaff by Wednesday night. This was, looking back on it, ridiculous, but I worked on Saturday and it seemed like it would work. The sky was overcast when I started, but it cleared up. It was also chilly, but not too bad, and the miles started to add up. 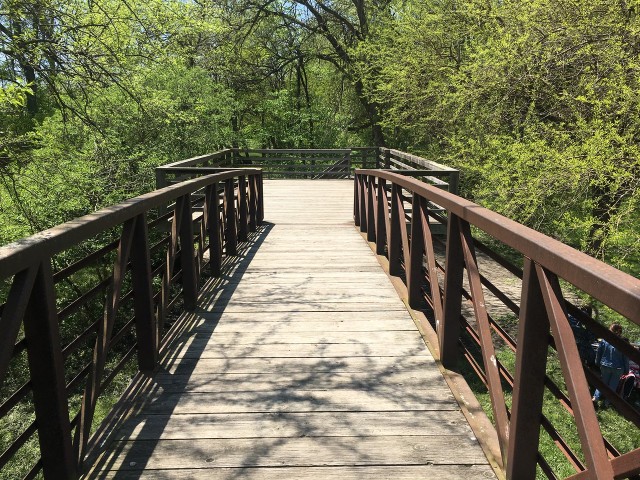 I was generally following rt 66 – which is to say I was riding the interstates that killed rt 66 before I was even born. I planned to actually ride 66 on the way home, and thought taking this route west would give me a sense of things to see on the way home (when I’d given myself time to actually look at things).

Since I’d named the Roxxie White Rabbit I’d been looking for a white rabbits foot for the keychain. Of course, on Route 66 I found one. 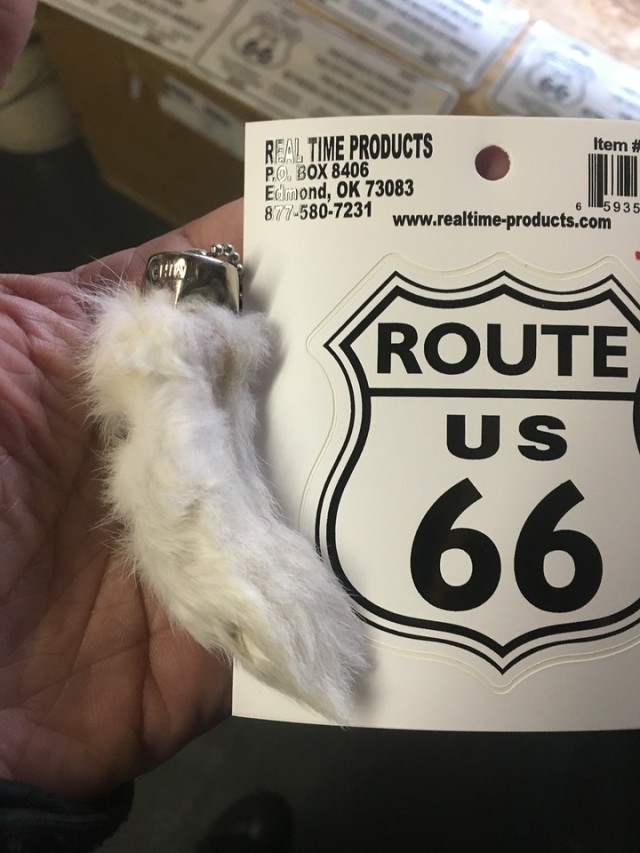 The bike also wasn’t happy. In the morning, it would stall at idle. Just randomly. Later in the day, after I’d been riding for a while, this wasn’t a problem anymore, so I decided the most likely issue was a loose valve.

The afternoon got more and more rainy and cold, and when I stopped for dinner I realized I was shivering uncontrollably. I took a long time to eat, and then went looking for somewhere to stay. Somewhere with hot showers. There was a Motel 6 in East Tulsa, so I decided that was going to be good enough.

It was a little sketchy. But there was hot water. I had to put in ear plugs around 1030pm, which was apparently when the party started. After that I slept pretty well, and was up early to start working on Rabbit.

It was overcast, but it wasn’t supposed to rain anymore. So, naturally, as I was just finishing up, drops started to fall. I hurried to get the valve covers back on before any water got in, but the full tank back on, and started up the engine. No stalling, so I assumed everything was okay and packed up – then I was back on the road.

My route through Oklahoma was I-44. I wasn’t a fan, and it was a toll road. There were only two tolls, one before Tulsa and one after. A reached the toll booth and the bike died. There was a pull off with a McDonalds and gas station so I stopped. The bike died again.

Now, at this point, I probably should have taken thing off and looked to see what was going on. I know this, and even thought about it for a while. But I don’t like doing hot valve adjustments and Oklahoma city was only another hour down the road. Stopping again so soon was going to make it hard to get to Flagstaff on time, but that was another problem.

Less than 10 miles down the road, Rabbit died. I was pretty sure that was the end of the trip, and at once I started to try and find somewhere I could hold up for a while to get the bike fixed. Someone suggested I call CSC and see if they had any suggestions to get the bike running. I didn’t have much hope, but called and spoke with Gerry. We went through some simple diagnostics, and he had me remove the spark plug to check compression.

That is the mashed end of my spark plug.