I’ve mentioned before who much of a fan I am of Horizons Unlimited. The same year I came back from South America they added a new event in Ontario. That year it was in September, and it was cold. The facilities weren’t the best either, but it was still a good time. I’ve been to every one HU Ontario event, except one. The last two years they’ve moved it to early summer, which has meant much nicer weather.

It’s not a secret, but I haven’t mentioned it much here on this blog, but I got married in January of 2016. On the long (okay, it wasn’t really that long, but just work with me) trip to Overland Expo I missed my new wife, and she apparently missed me. She has two girls, and arranged for them to spend some time with their dad, so she could come with. I wouldn’t be traveling alone.

Now, I am a default solo traveler. One of the things I love about Sue (the woman in question), is that traveling with her doesn’t seem like a burden. She manages to keep up, usually, and is open and accepting of whatever impromptu side adventures I feel like having. And when I get lost. I do get lost.

The ride was going to be about 750 miles each way. We initially had 3 days there and 3 back, but I agreed to work until noon on the day we were going to leave, so then it was 2 and a half days out. We decided to get through Chicago, since it’s not a fun city to ride in, and then stop on the first night. We didn’t take a lot of pictures, there wasn’t much to see.

One thing that did happen was the death of my Sena. It was on I-294, south of downtown. I don’t even know what happened, but it fell off my helmet in 4 lanes of traffic with no shoulder. Sue, riding behind me, saw it fall and get hit by a couple cars. She knew exactly what had happened. I took the next ramp to talk to her anyway. We decided to ride on without them, and probably replace it when we got back.

It was dark when we got into the area we wanted to stop. Sue had said she didn’t want to set up camp in the dark, so I went to our plan B motel. When we were stopped, she asked me why we hadn’t gone to the campground. I pointed out that it was dark, but she thought there was still enough light to set up camp. I thought so too – but since we’d lost the intercom we hadn’t been able to talk about it. So we decided to replace my Sena on the road. 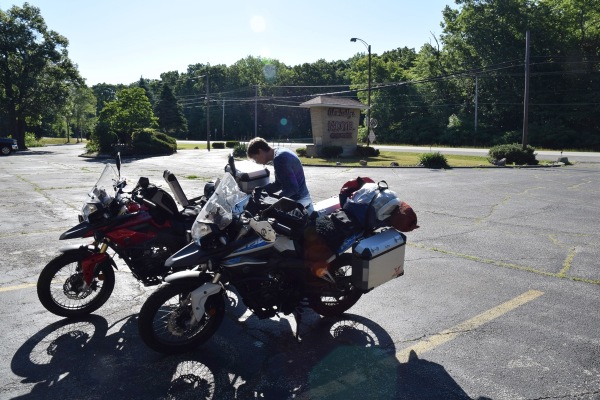 Very first picture on the trip – morning of Day 2. We’d slept in and were the last to leave the motel. The parking lot had been packed the night before. And, yes, Sue also has an RX3, a red 2016 model. It was just barely broken in when we left. We also had the upgraded luggage now, not so much for this trip as for the next one (FORESHADOWING!!!) 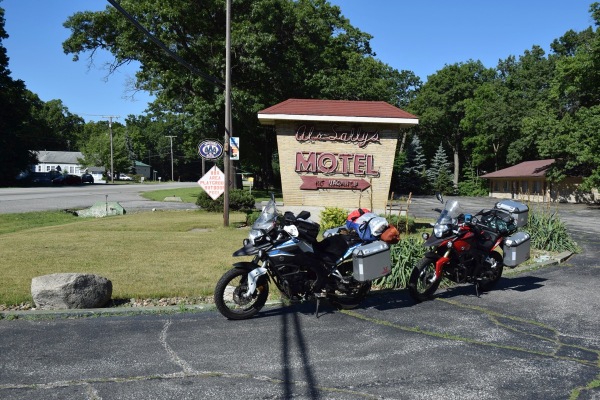 Al and Sally’s is a nice place, by the way. There is a train track behind it, but we didn’t hear anything overnight. Neither Al or Sally still work there.

Since we’d decided to replace my Sena we had to find one. There were a few places in Lower Michigan listed as Sena dealers, but as I called them in the morning it turned out that most of them were online dealers only, and would order in what they needed, rather than keeping anything in stock. Sue really wanted a 10C – their camera model – but all we could find was a dual pack of the model we already had (SMH10). We didn’t need 2, but beggars can’t be choosers, and they were cheap.

So, thanks to Coloma motorsports! As a side note, they also have some nice vintage bikes in there. And free water.

Now that we could talk to each other again we started west. We’d lost another half day, so we rushed across lower Michigan as best as we could. It was hot and the riding wasn’t exciting. We stopped…somewhere…for lunch and air-conditioning.

We intended to cross into Canada at Port Huron/Sarnia, so that was our destination for the night. I’d wanted to cross in the evening and sleep on the Canada side, but at our last fuel stop before crossing I could tell Sue was very tired. I decided to just call it a night and looked for camping. The only real campgrounds in the area turned out to be very expensive, so we then looked at motels. There was one very close that had good reviews, so we rode over.

The office had a little ante-room with a buzzer, so we buzzed. And buzzed. And buzzed. Then we went back outside. There were a few people just lounging around in front of their rooms, so we asked if they knew where the manager was. They stated she had gone to some event with her son, and gave us her cell phone number (not kidding). So we tried ringing that, but there was no answer.

Now it was starting to get dark again, and I was starting to feel the long day. I found another hotel, this one downtown, and we headed there. It was more expensive, but the staff was at the desk, friendly, helped us with the motorcycles, and suggested places to go and eat. Totally worth it.