Okay, I’ve never actually stayed in Port Huron before this. In fact, the only times I’d even come this way to Ontario HU was when I was covering the distance in one day – which I wasn’t doing this time, but we’d lost a day in my working and the loss of the Sena. So, Port Huron.

While we’d managed to find somewhere nice to stay and good beer, our first impressions of town weren’t positive. It is a border town, I suppose, but it’s between the USA and Canada – I guess I expected more. The downtown area, near the marina, was nice. But it was only a couple blocks long and about the same deep, and a few more blocks inland were neighborhoods that just felt wrong – sad and run down.

We didn’t go other there.

Once the bikes were parked and we changed into non-riding clothes, we took the dinner suggestion to heart and walked over. We stopped occasionally along the way for amusing photos – 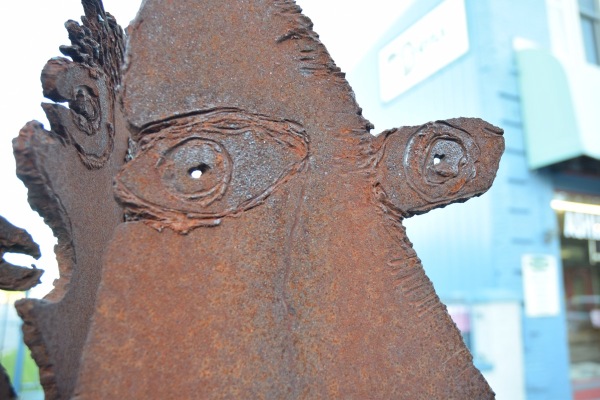 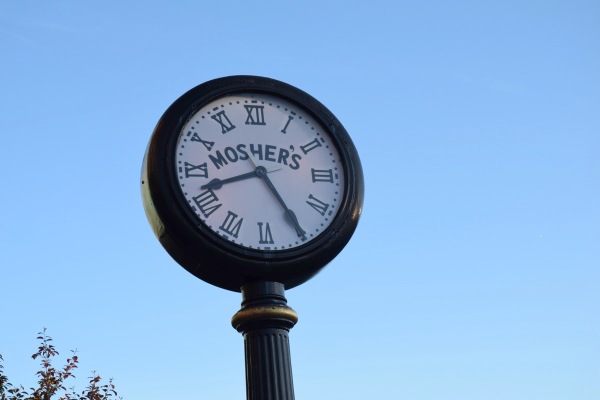 We were directed to the Thumb Coast Brewing Company, which was near the marina. Sadly, their kitchen closed at 8, so we just had beer (on an empty stomach) and talked with our server about where we should go instead. He suggested a BBQ place which we’d passed on earlier, not so much because he liked it as that it was still open. 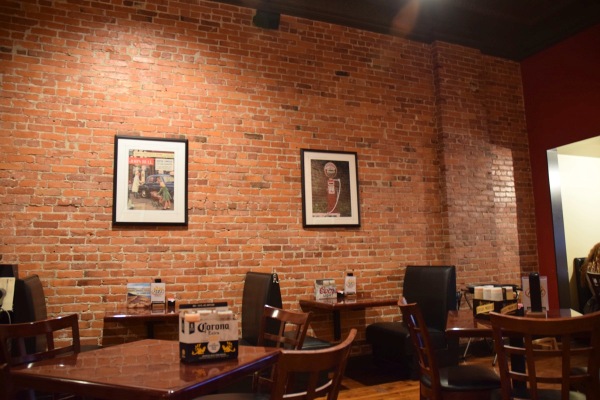 I am always nervous about BBQ in the north. The food is one of the main reasons I go to the Southeast – since they really know how to do BBQ. As I expected, this was okay without being amazing, but there was one item on the menu worth pointing out – Pig Candy. This was hickory smoked bacon covered in brown sugar, and then fried. I’ve actually made it at home, but it’s always delicious. We had it as an appetizer, and perhaps the main meal just didn’t measure up to bacon and sugar. 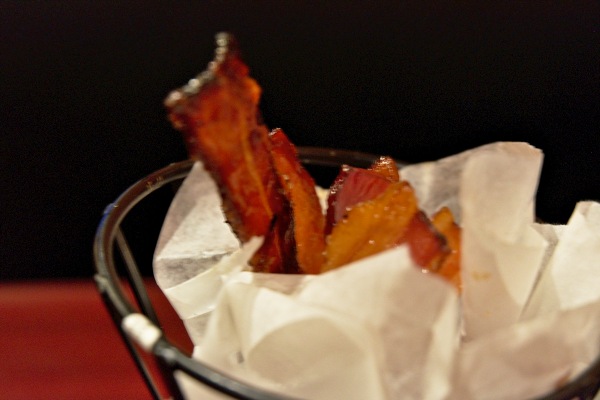 It really was dark after dinner, and we went to bed hoping for an early start.

Which we didn’t get.

But we did manage to get into Canada without any issues and stopped for a picture at the sign (after asking if that was okay). 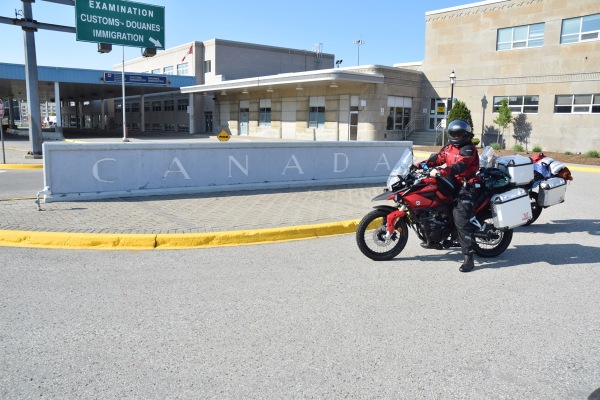 We’d decided to head north along the coast of Lake Huron, rather than cut across towards Toronto. I’d always wanted to take this route but had never actually tried it. We were supposed to be at HU in the evening, but the mileage didn’t seem bad and we both wanted to get onto smaller roads after the dash across Michigan.

There was, though, two things we needed to address right away.

First was money. Since I generally use cash in Canada these days (given that I’m only usually there for a few days and don’t spend much it’s easier) we needed to get some cash. Sue went to an ATM and took out some, her first real chance to see Canadian currency in real life.

“Ooh, so pretty,” she said holding up the notes.

“Yes, but I assure you it’s real money,” said the guy refilling the coffee machine behind her. He was smiling broadly and I wondered how many times he’d heard something like that. Also, I have to admit I didn’t know this was Sue’s first time with Canadian currency. I knew she had been to Canada before, but she’d been 16 and someone else had just taken care of the money.

The other thing was just as important. 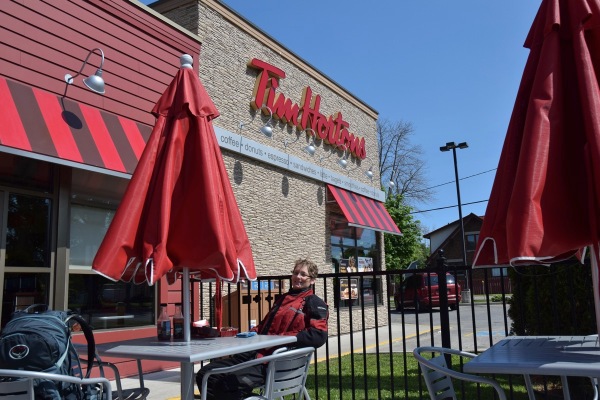 We’d eaten at Tim Hortons before while at Niagara, so this wasn’t a first, but it is still something you have to do when you get to Canada. It was late morning, and we’d had breakfast before leaving the USA, so it was donuts for brunch. 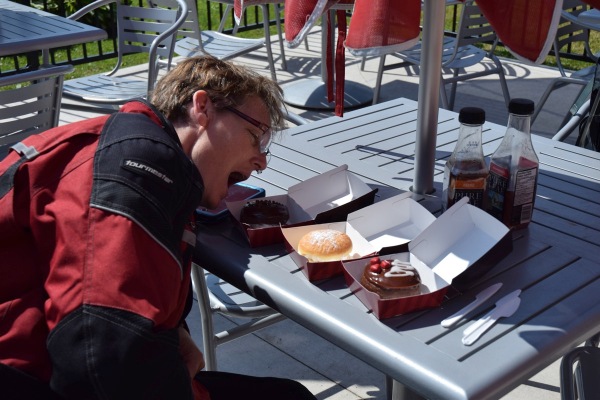 I usually just get a box of TimBits, but Sue saw the featured donuts and had to have them. To be honest, there is a similar picture of me and the donuts, but Sue took it and I don’t have it, so you get to see this one.

After the donuts and some time to digest we were back on the road. I saw a short gravel turn off to the left and took it on impulse. To the left was Lake Huron, and it seemed like it might be worth the diversion. Sue likes riding on dirt and gravel, now that she has a good motorcycle for it, so I didn’t even bother to ask. 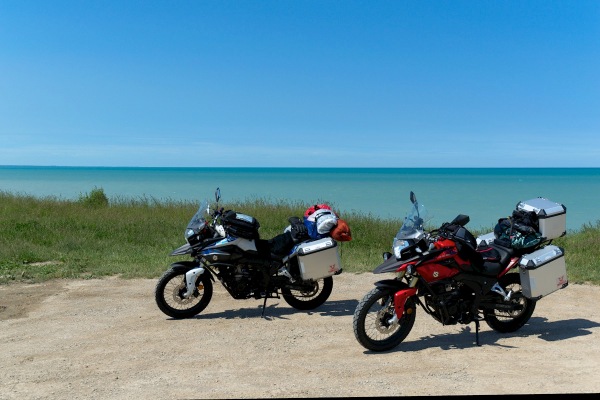 Once we turned inland, things got hot. Quickly. I had a hydration pack in my backpack, but Sue didn’t so I made sure we stopped often for water. I started to count miles and wonder if we were going to make dinner. We’d paid for dinner on Thursday, and didn’t have a lot of food left. We could manage if we had to, but if we weren’t going to make dinner at HU it would be better to stop and get something better than noodles or rice (which is about all we had left at this point). The bikes still needed fuel at regular intervals, and we still stopped at least once between fuelings for water and a break. Getting anywhere is rarely worth pushing and risking accidents. 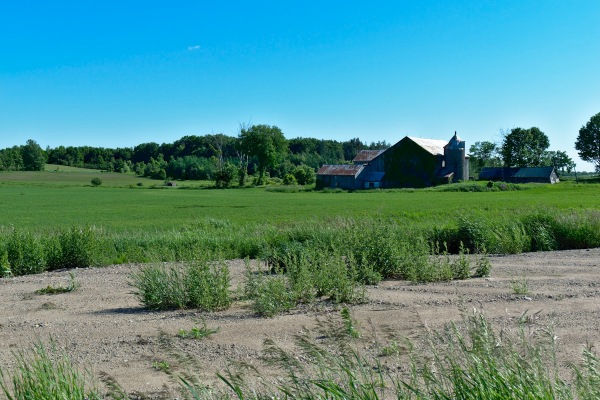 We reached the venue at 550pm. Dinner ended at 6, so we went right for the food (after some quick hugs) and loaded up our plates. Then we checked in, found somewhere to set up our tent for the weekend, and then realized we were too late for the evening presentations. So, it was time for campfires and meeting new people. The next morning, things would start for us, since I had a presentation at 9am.