I left Crater Lake heading south (I would be going south for a while yet). I was heading generally towards Reno, thinking about sending home the Nomad to reduce weight and replacing my nice, expensive tablet notebook with a less expensive model with more battery life.

As I was riding I started to see signs for the Lava Beds National Monument. I could see it on my map, and it looked like it was a ways off my route. I was surprised to see a sign. In fact I saw several signs as I rode south and finally turned off and headed for it. A large part of this was just enjoying camping and the wilderness, not in a rush to reach the city of Reno.

As I headed for the Lava Beds I realized why I was seeing signs. It really is off in the middle of nowhere.

The Lava Beds area actually a series of caves, and since it was getting hot out I liked the idea. The campground was empty, in fact it felt like I had the whole place to myself. Also, the caves didn’t have scheduled tours (unlike every other National Park Cave I had been too), you just picked a cave and off you went. You could ‘rent’ flashlights by leaving your ID at the visitor center, and the rangers pointed out which caves needed actual spelunking gear. 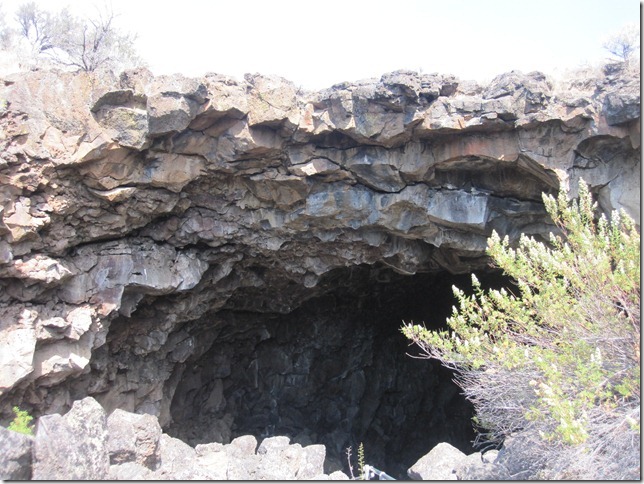 I picked the Skull Cave, how could I not when it’s called Skull Cave? In fact it’s called that due to Native Americans removing a lot of bones from the cave. The signs didn’t say why there were bones in there, and I admit I was sort of hoping for a skull shaped entrance (just like the rest of you).

I hadn’t gotten a flashlight since I had one, but the cave was really dark. There were no little lights for the path, as perhaps I had gotten used to in other caves. 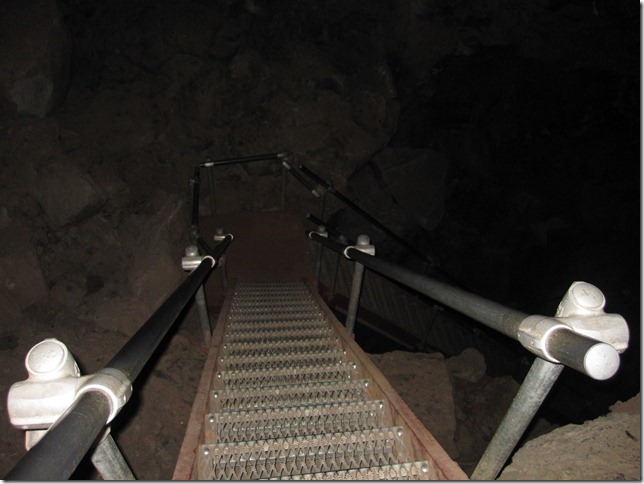 Skull Cave is an Ice Floor cave, which means exactly what you think. The floor of the lower level is covered in a couple feet of ice. So it was quite chilly. When it was first explored the ice was crystal clear, but as visitors tracked dirt over it the clarity faded. Now the cave is closed past a certain point, and there is an elevated walkway to keep visitors off the floor. 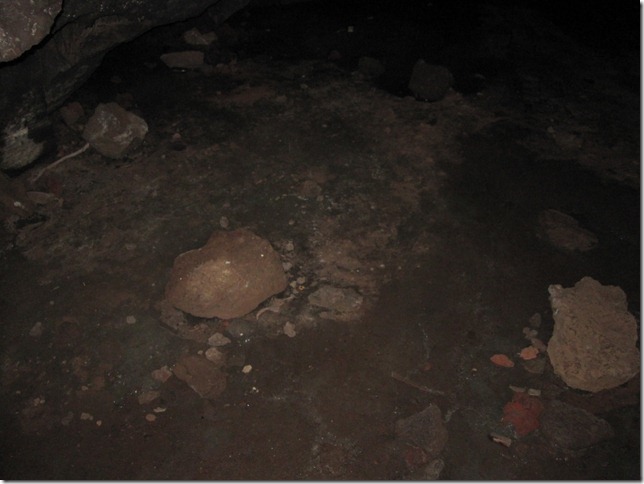 I left the Lava Beds, camped at a place called Hawk’s nest that was inexpensive, had free showers, and laundry for a dollar. There were only two other campers, both RV’s, and I had to tent area to myself. The owner actually told me to use a nearby RV site for electricity if I needed it.

Reno wasn’t far away, and I left late the next morning.

I reached Reno and settled into a hotel for a few days. Since it was already night I decided to wait to see the sights until the next day. John, from Crater Lake, suggested a visit to the National Car Museum, so I went there first thing in the morning.

Seattle was still recent enough that I appreciated the free parking.

There was a gold plated De Lorean sitting in the lobby. Since I had just finished Ready Player One (which features a De Lorean) I thought it was extra cool.

I took a huge number of of pictures from the inside of the museum, though it’s over 200 cars didn’t seem as focused as the smaller number in Fairbanks. Which isn’t to say there wasn’t some cool stuff. 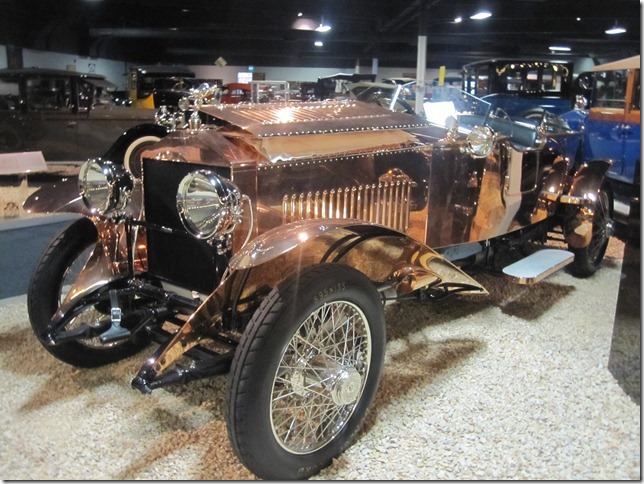 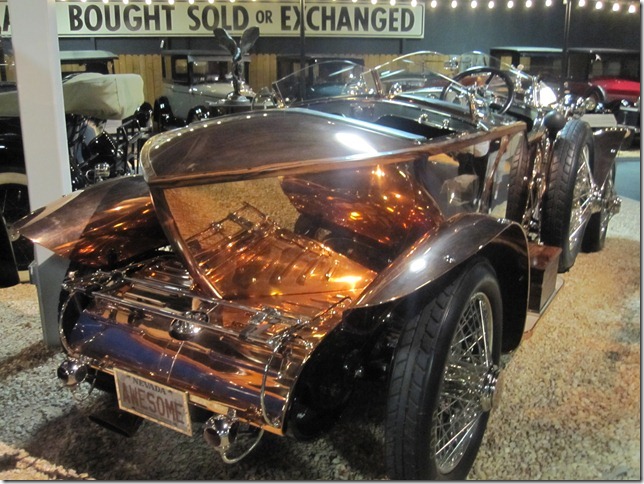 One of the large displays was on the Thomas Flyer, which won the New York to Paris race in 1908. It was the only American entry, and was the last car to be entered in the race. 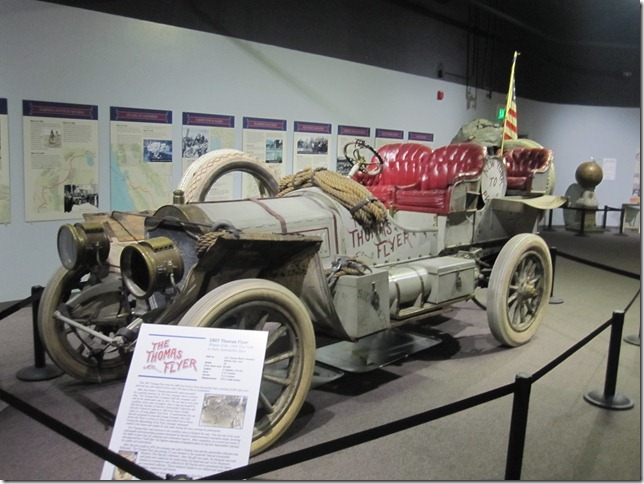 Technically the German car reached Paris first, but it had a 15 day penalty for using a train in the USA, and the Flyer had a 15 day bonus for being the only car to reach Alaska. The route had them driving over the Bering Strait, but the roads were impassable and the organizers changed the route. The Flyer had to return to Seattle. Still impressive. Since the Flyer reached Paris only a few days after the Germans it was declared the winner. The German car and team had already headed back to Germany. Only one other car finished the race, several months later.

The race was the basis for a film called “The Great Race,” a 1956 comedy with Jack Lemmon, Tony Curtis, Natalie Wood and a very young Peter Falk. It is among my favorite movies, despite the saber fight near the end. The movie is not historically accurate, but who cares?

Along with the cars there were displays showing the world at the times the cars were built, and some cool recreated streets.

And ads, of course. 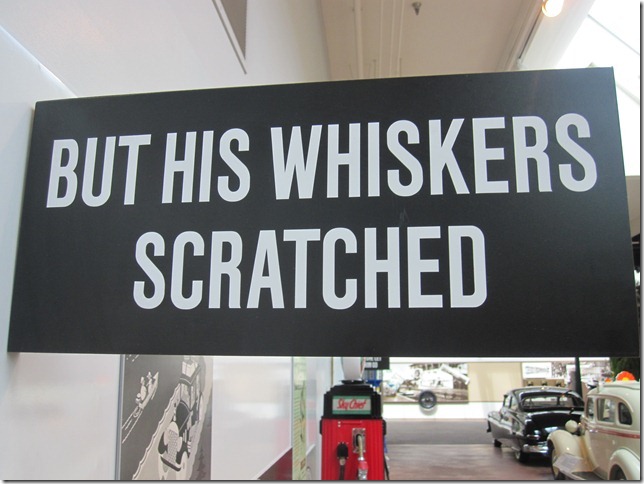 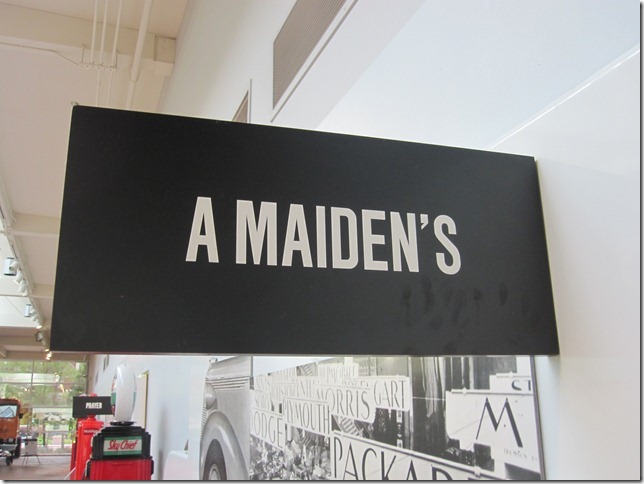 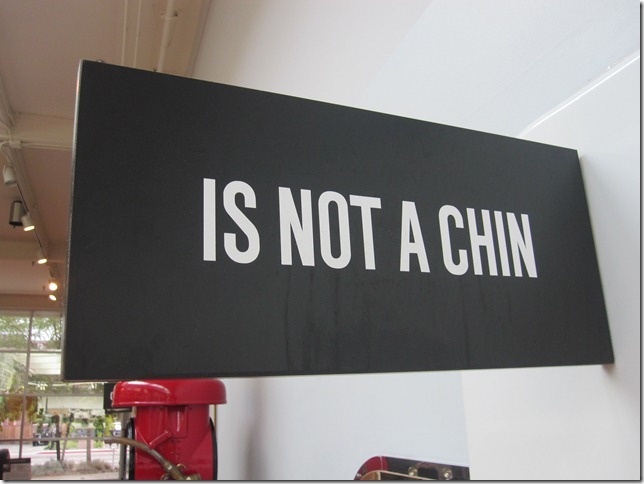 After the car museum I headed for another local attraction I had heard about, Valentine City. It was an old mining town south of Reno, and while I had been warned it was a little touristy, it was also supposed to be interesting.

It was both interesting and touristy. Odd to see an old, worn western building with the usual cheap stuff inside.

There was something called the Suicide Table, inside the Delta, which sounded interesting. 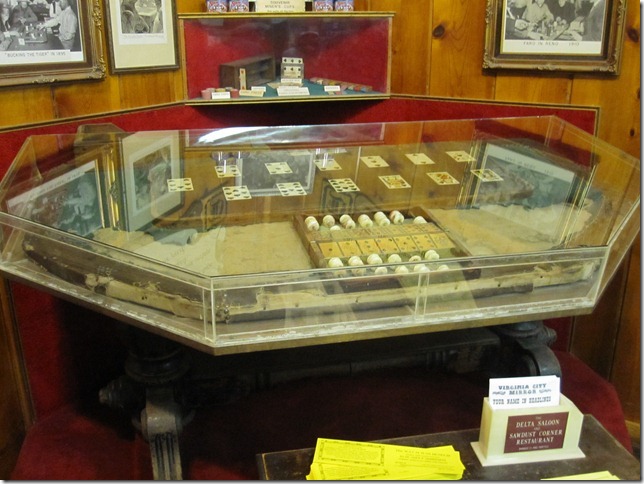 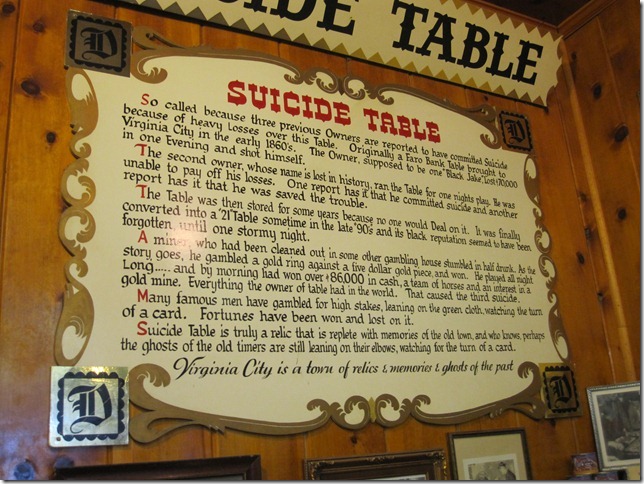 Another interesting fact about the town, which I found out after I got there, was that Mark Twain had worked at the newspaper. Apparently this was the first place he used the Mark Twain byline. The building holding the newspaper offices was destroyed by fire (along with the rest of the town) after he had left, but the lower level was incased in stone and survived. The building’s current occupant had turned it into a very small museum and (of course) charged you to enter. 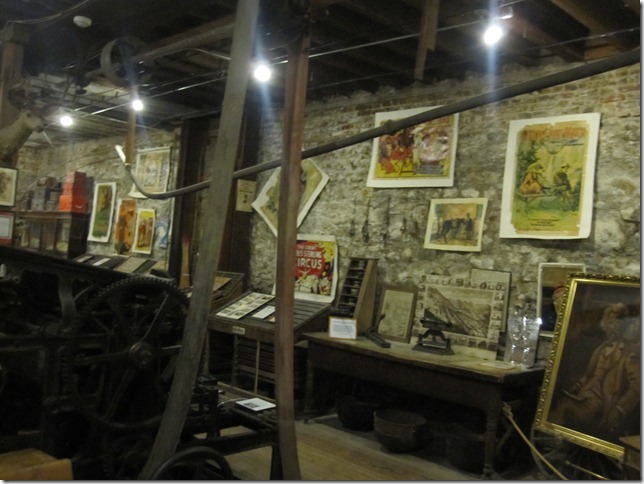 Blue tried out the table, saying it wasn’t really that comfortable. But he is a soft bear.

After wandering around some I headed back to Reno. Night was falling, and while Reno isn’t Vegas it does have quite a few casinos.

This is actually the ‘lil Nugget,’ the orgional location but a (much) larger hotel and casino was built outside of downtown. I choose this place for dinner to get something called the ‘Awful Awful,’ which is really just a burger. A large burger. Both nuggets have their version, but in a episode of Food Wars the lil Nugget’s version was declared better.

That is a pound of fries. I didn’t make much of a dent on those, but the burger was delicious. 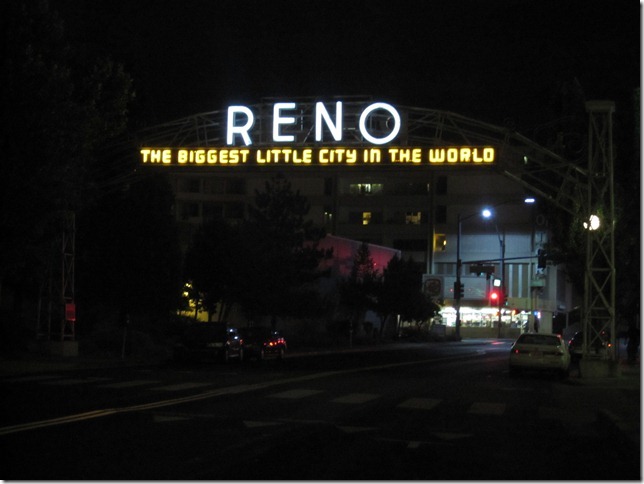 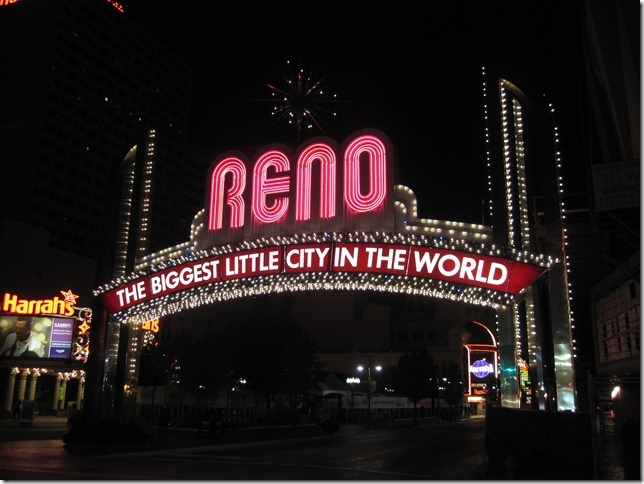 And, of course, the new one. In the morning I was headed for Yosemite.

2 Responses to Lava Beds and the Biggest Little City